Every morning when Isla arrives at school, her best friend Samantha’s face lights up and a big smile spreads over her face. They hug tightly and touch faces and Isla plants a kiss on Samantha’s cheek and says “hi Sammy”. Normally then the teacher says “that’s it girls”. “No more hugging for the day.” Left to their own devices they would hug all day and get no work done at all!

Anyone who sees the girls together can’t help notice their beautiful connection. Sammy is non verbal but is trying desperately hard to talk to Isla. Isla does not see Sammy’s disabilities and they have no trouble communicating as Isla reads her friend without needing any words. She will often bring Samantha her drink or some food or will say “what you saying Sammy?” When finishing the cross country (with Sammy’s mum pushing her all the way round) Isla runs up to Sammy saying “I’m so proud of you”. She is very caring and nuturing to Samantha. We have never seen this side of Isla with anyone else. She will tenderly give Sammy a hug and kiss and will say “I love you Sammy”. She has never had any interest in having a friend before. Plenty have tried befriending Isla but she hasn’t been interested until she met Sammy.

When apart, Sammy will sign Isla by touching her middle finger. This is the sign for “I”. The girls both have a wicked sense of humour and Isla loves trying to make Sammy laugh. They are mischievous friends together with Isla doing silly things to make her friend chuckle.

Sammy has a calming influence on Isla and has helped Isla brave events she is highly anxious about. Recently at their school disco, Isla was petrified to go in. A dark room, with bright lights and loud music is a sensory nightmare for Isla. She got through it by holding Sammy’s hand as they made their way to the dance floor. They then danced the night away but Isla never left Sammy’s side. The learning for both of them when they try these experiences together is so much richer than if they were trying things in isolation.
Their friendship has been life changing for both of them. It is so special to have a best friend to do things with. They enjoy swimming and dancing after school activities together and seem to enjoy it so much more when the other is there.

Samantha’s mum Adele gives her point of view
Samantha’s world has become a much larger place since Isla and her family arrived into it. The connection between Isla and Samantha was immediate, when Isla first joined the satellite class. Samantha has always been blessed with being social and making friends easily throughout her time at kindy however she’d never had a ‘best friend’ like Isla. Samantha’s motivation to go to school in the mornings improved ten-fold and as parents we certainly made the most of saying ‘you’ll see Isla’ if she appeared reluctant to get out of bed and go to school.

I remember Isla’s first play date at our house, with her fabulous sister Carys coming along too. The girls played so well together, in part because Samantha’s condition doesn’t allow her to get up too close into Isla’s face, thus making her uncomfortable, yet Isla was able to interact with our non-verbal daughter in such a way that squeals of delight and constant giggling could be heard from Sammy’s bedroom! David and I often stop to listen to the ‘beautiful noise’ being created by the girls. Carys has been a major conduit in their relationship and I think Samantha secretly ‘hero worships’ her. Carys attends the dance classes with the girls and allows Samantha to access the dance class to the best of her ability.

Imogen, Isla’s eldest sister, has also been instrumental in allowing the girls to do the many activities that other children their age do. Last year on Halloween, Isla went ‘trick or treating’ for the first time with Samantha and some other friends. Imogen and her friends went around with the girls to make sure that they were safe when knocking on strangers doors. Another activity that the girls enjoyed was selling gingerbread ponies at the school gate to raise money for RDA. Imogen and Carys were both there, along with Sara and I, to help sell them. The girls loved it so much and it was just wonderful to see them doing an activity that was ‘age appropriate’ for them.

Like all good friends, they have their special and unique ways of doing things. One of the first causes of great excitement was to ride in each other’s’ cars – something most children of their age may take for granted. For our daughters, this has always been a special treat for them yet to us it is such a simple thing to do. Isla likes to come in our car to swimming, and one of the things the girls do is to raise their hands in the air and shout ‘woo-hoo’ as they go over the numerous judder bars down to the pool. 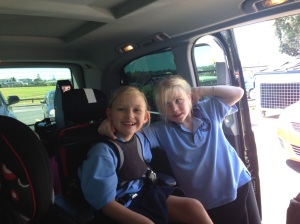 Sara has been a great help to me too on the days when I’ve been at work and haven’t been able to be at school pick-up. Samantha has delighted in going in her best friend’s car as being reliant on a wheelchair for mobility, it often makes it difficult to travel in other cars. Thankfully, Sara has never seen this as an obstacle and will put Sammy’s wheelchair in the boot of her car. As a special treat we sometimes take them to MacDonalds and they have a race to see who can see the ‘Golden Arches’ lit up in the night sky first. On the way home the girls like to read all of the neon signs in the back of the car. Again, such simple things but little traditions that make them so joyful.

We feel truly blessed that Samantha has Isla as her best friend. The girls have achieved so many more rich experiences in their lives as a result of their friendship. For Samantha as an only child, she has been lucky to build a relationship with Carys and Imogen too. Samantha and Isla’s friendship has taught me that a lack of language and mobility is no barrier to building a solid friendship – like all good friendships, it’s about taking the time to create treasured memories together.

Hi my name is Sara Stythe and I am a mum of 3 beautiful girls. This is a place to share knowledge, resources and information I have learnt along the way on this unexpected journey with our unique youngest daughter. Isla is missing a tiny bit of her 2nd chromosome (2q23.1 Microdeletion Syndrome, recently known as MAND) causing autism, epilepsy and development delay. If you would like to receive my new blog posts by email you can subscribe. Thank you View more posts

2 thoughts on “Best friends make the world go round”